The Complicated Path of RMB Internationalisation

By Jonathan A. Batten and Peter G. Szilagyi

At the end of January 2013 the Bank for International Settlements (BIS) released its preliminary international banking statistics for the period up to September 2012. The aggregate level data suggested only very modest improvement in international bank lending activities (external assets of US$29.41 trillion) broadly consistent with an international economy not so much stalling but operating in very low gear. Importantly, this report made reference to a decline in cross-border claims by banks to China, which fell US$49 billion for the period June to September 2012, while claims elsewhere in the Asia-Pacific region increased. Closer examination of this data shows that international bank lending to China declined from US$436.3 billion in June 2012, to US$401.7 in September 2012, while deposits from China also fell from US$408.1 billion to US$388.1 billion.

Taken together this data is more consistent with China’s withdrawal from international banking markets rather than an expansion. Such an outcome would appear at odds with the common view of the increasing internationalisation of both China’s economy and its currency the renminbi (RMB). For example, while during the same period international trade settled in RMB declined below the earlier peak of 12.0% of trade flows, the most recent data from the Hong Kong Monetary Authority for Hong Kong cross-border RMB suggests that the long term upward trend remains intact. This means that RMB settled trade at year-end 2013 should approach 15%.

But how does the decline in cross-border banking fit with the apparent expanding role of RMB trade settlement? The answer lies in the complexity of the bank internationalisation process, which includes securities purchases and sales as well as bank deposits and loans. This suggests there is also a need to consider factors other than just trade settlement as a driver of currency internationalisation, although one cannot ignore its importance.

Restrictions on offshore remittances and requirements for government approvals (e.g. through the Renminbi Qualified Foreign Institutional Investor (RQFII) scheme) may make security purchases by foreigners difficult in the domestic financial system but it can easily be achieved if a security is purchased in international markets. Importantly, when a Chinese corporation issues an international bond it provides opportunities for investors to benefit both from diversification of credit and possibly foreign exchange risk, as well as a reduction in asset concentration. Longer term it provides opportunities for investors to become familiar with Chinese borrowers, whose credit status and standing was previously unknown. This process would seem particularly important if the Chinese authorities would eventually like these same foreign investors to be present in the domestic financial system.

It would therefore seem no coincidence –or a surprise – that the attached figure shows that this process is already underway. This figure shows the share, in percent, of international bonds issued where the nationality of the issuer is (a) from China; (b) from Hong Kong, SAR; and (c) Chinese Taipei. Due to the complex ownership structure that is known to exist for many Chinese corporations all three perspectives and a total of all three is provided.

In recent years China has been the second largest international bond issuer to South Korea in the Asia-Pacific region. While this remains true today, the gap between the two has narrowed with South Korea’s outstandings now US$171.4 billion compared with China’s US$154.3 billion in September 2012. To put this in perspective, international bond outstandings by Japanese issuers totalled US$390 billion in September 2012. Note that Hong Kong’s share of international bond issues (despite possible impacts arising from developments in the dim-sum market) appear to be declining, as is also the case with Taipei. The stellar performance here is from Chinese issuers, with issuance surging after regulatory developments that began in 2010 (e.g. foreign firms and later non-financial Chinese corporations being able to issue RMB bonds). Consequently, international bond issues by Chinese issuers now stand at about 4.3% of total bond issues worldwide (or 7.6% if you count China, Taipei and Hong Kong together).

What is important is the pace of this development and the implications this may have for domestic as well as international financial markets. For example, are Chinese corporations issuing in international markets because it is attractive to do so in terms of price, or because they are being crowded-out of domestic markets by a Government sector needing to fund growth-supportive domestic policies? Importantly, what is the future role for Hong Kong and London as the place of issuance of securities by Chinese corporations? Will one centre emerge as the preferred location over the other, or will a new financial centre eventually emerge (perhaps in Singapore)?

Another question concerns the impact of any relaxation in capital controls (e.g. an expansion of the RQFII scheme), which could see a preference for onshore rather than offshore investment by foreign institutions. Collectively this could result in substitution effects in international bank balance sheets. For example, international banks will likely prefer to buy the bonds of Chinese corporations over direct lending and loan syndication, since these securities are more marketable and transparent in terms of pricing should the need arise to liquidate a position. Importantly for the future role of the RMB, will an increased presence in international bond markets and greater participation in domestic markets by foreign investors affect the pace of RMB internationalisation and the development of China’s financial markets in the long term?

The uncertainty in answering these questions highlights the difficulty for those attempting to measure the scale and scope of RMB internationalisation, as well as the identification of those factors that may drive the process. Nonetheless, one thing is clear, it will not be simply the preference for one currency over another for trade settlement, the degree of holdings by central banks, or the extent of RMB denomination of international securities, but all of these factors- and others- together, driven by complex regulatory and price interactions between domestic and international markets. Together this will make the RMB an international currency, or not. 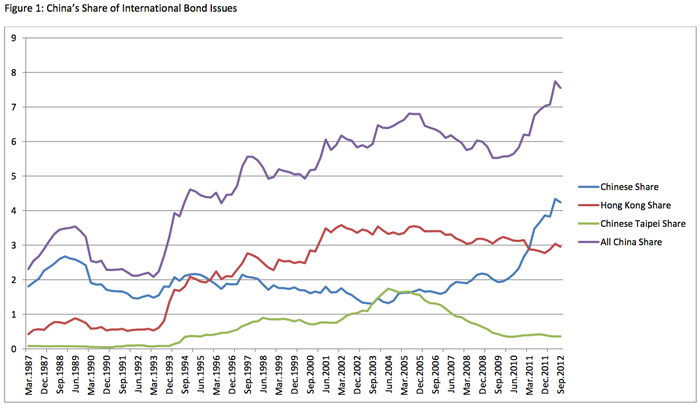