Sovereign-bank Nexus and Collateral Use in OTC Derivatives

Current market practices for those using OTC derivative contracts results in residual derivative liabilities and derivative assets. By residual we mean after all possible netting has been done within the OTC derivatives book of a large bank and after the (limited) collateral posted on the contracts has been subtracted. Thus, this residual risk captures the shortfall of collateral stemming from clients of large banks not posting their share of collateral to the banks and vice versa – also called one-way CSAs (credit support annexes) rather than two-way CSAs where both parties to the contract post collateral to each other. It is estimated that the 10-15 largest players in the OTC derivatives market may have about $1.5 to 2.0 trillion in under-collateralization for derivative receivables and a similar amount of derivative payables. Such residual liabilities and assets exist because clients’ of large banks such as sovereigns, AAA insurers/pension funds, large corporates, multilateral institutions (e.g. EBRD), Fannie Freddie, and the “Berkshire Hathaway” type of corporates do not post their full share of collateral. They are viewed by large banks as privileged and (presumably) safe clients.

From a risk management angle, large banks’ credit valuation adjustment (CVA) teams need to hedge their ‘in the money’ positions, or derivative receivables, when there is a likelihood that these positions may not be paid in full. Under the old regulations there was no CVA capital charge. However, Basel III’s recommendations will require a capital charge for under-collateralized exposures. Basel III will recognize a capital relief if such exposures are hedged but only via CDS. However, hedging derivative receivables due from a sovereign pushes up the CDS spreads on the sovereign, as seen in peripheral Europe in recent years. This in turn may impact the sovereign’s debt issuance costs (since CDS spreads impact the spreads of the underlying bonds). There are draft proposals to exempt capital charge for banks when dealing with privileged clients.

Typically, the “street” or the large 10-15 dealers active in the OTC derivative market, are often on the same side of a trade (i.e. a few of them may hold similar positions when dealing with a sovereign). For example, several market and official sector sources indicate that the street is “in-the-money” on interest rate swap (IRS) positions that have been written since the early 2000s. Most dealers took the floating rate leg of an IRS, and the sovereign typically took the fixed leg. As rates have remained low since the 2008 crisis, many of the IRS positions are now sizable derivative “receivables” on the books of the banks since sovereigns typically do not post collateral to the large banks and settle at maturity.

Figure 1: Illustrative example of “in the money” position that need to be hedged 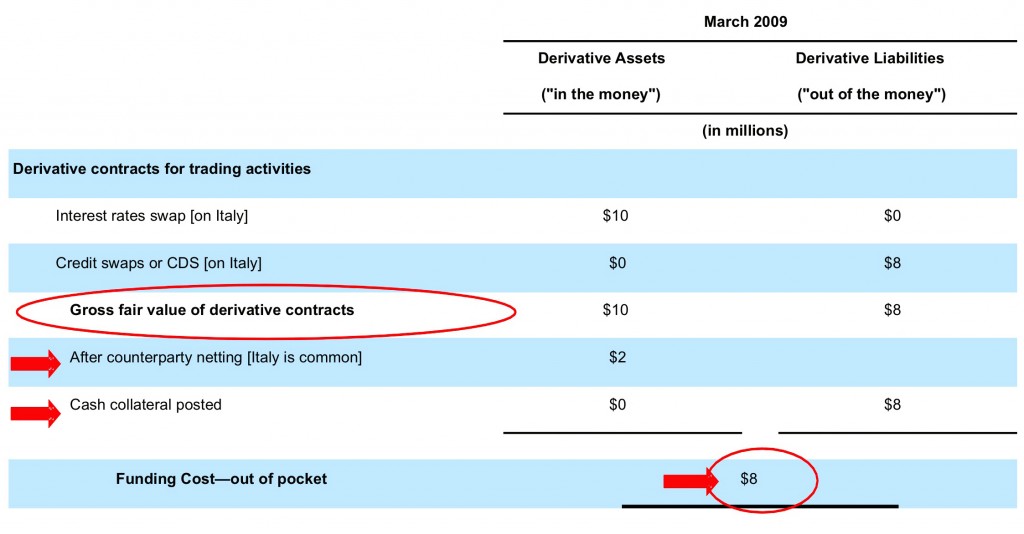 Due to Basel III, the demand for hedging such growing receivables leads to a rise in CDS spreads of the underlying Sovereigns, Supranational (ECB, EBRD, World Bank, etc.), and Agencies (Fannie Mae, Freddie Mac) – collectively clubbed as SSAs – that are “out of the money”. Market sources indicate that between 10%-15% of a large dealers’ receivables that need to be hedged may stem from SSAs; an equal fraction is from corporate clients. Thus, addressing the under-collateralization issues is important to the understanding of CDS spreads when sovereigns/quasi sovereigns are in distress – since that is when the CVA teams will hedge positions. There is no rule as to when the CVA teams will hedge. Some may act sooner than others; but there is no threshold that CVA teams have to hedge if clients are rated for example BBB or below. At present, published sources (e.g. RISK, 2012) indicate that SSAs may be out of the money by $150 billion to the banks (who are “in the money). The banks in turn have similar funding costs as they hedge these positions with another bank and thus have to post collateral on being “out of money” on their hedges.

I thus suggest a tax, or a levy on residual derivative liabilities to be a more transparent approach than moving OTC derivatives to CCPs, especially if the costs to bail out CCPs are to be funded by taxpayers. If a levy is punitive enough then large banks will strive to make derivative liabilities reach zero. Either they incur funding costs to get the business of privileged clients, or lose the business, or ask clients to post collateral when due. As a result there will be minimal systemic risk via the OTC derivatives markets if a large bank fails. From a risk management angle, large banks need to hedge their ‘in the money’ positions, or derivative receivables, when there is a likelihood that these positions may not be paid in full. Recently, Italy had to pay out $3-4 billion to Morgan Stanley due to Italy being “out of money” on their OTC derivative positions as collateral was never posted—Morgan Stanley invoked a “break clause” to do this. Thus, addressing the under-collateralization issues result in other synergies that are not being considered in the CCP discussions. For all the proper nouns included under SSAs (and those piggy backing under “end user” stamp), clearing is a secondary issue. They need to post collateral; the CCP twist just skirts the real economic issues.