Guest Article – China ABS in the first half of 2016

A follow up by Adjunct Professor Ann Rutledge, Hong Kong University of Science and Technology

This January in Davos, the Vice Chairman of China’s Securities Regulatory Commission (CSRC) Fang Xinghai was quoted as saying, “China’s markets are volatile. Get used to it.”

The growth story of China ABS shows domestic investors have done just that—got used to the volatility. Ever since China’s 2013 Third Plenum market reform agenda gave a big initial boost to its development, China’s ABS market has developed rapidly but not necessarily sustainably.

The watershed in growth began sometime late 2014 – early 2015, coincident with the term of my grant from Swift Institute. The most pressing question about China’s ABS market seemed to be, which market institutions would be early adopters—which would put their commercial imprimatur on the market structures and standards?

Then, the answer then was not clear: Leaders are change agents. Change requires disruption. From early contact with market participants I sensed a will to comply with government policy but no will to disrupt. In mid-2014, global confidence in China’s macro-economy and financial reform progress was still high.

From early spring 2015 through December, foreign observers’ confidence in the China model was shaken by spates of extraordinary levels of volatility in China’s equity markets and concurrent currency jitters. I delayed the publication of my paper in order to reflect on the structural meaning of these shifts and their significance for ABS

My detailed findings can be found on the SWIFT Institute Research page here.

Since the paper’s publication in September 2015 and presentation at SIBOS in October 2015, pressures on China’s capital market development have continued unabated. Concerns about debt overhang and asset impairment have mounted.

How has the ABS market fared, specifically? In this brief update, I focus on three key themes:

As these trends were predicted in the growth schematic outlined in my paper, China’s need to develop a mature market understanding of ABS risk is palpably intensifying.

ABS and the P2P Sideshow

In 2014, I thought the most plausible ABS market development scenario in China was for marketplace lending giant/Fintech disruptor Alibaba to take the lead. Alibaba was a pioneer in microfinance with experience in China’s domestic ABS market. But that is not how things turned out.

Alibaba was more interested in tapping the equity and P2P market sectors, which offered greater liquidity than early stage ABS. While Alibaba IPOed in the NYSE in the fall of 2014, affiliate Ant Financial Services Group (formerly Alipay) steadfastly focused on developing P2P (a.k.a. marketplace lending) channels and tools. P2P had the edge over ABS in the investor beauty contest. It grew faster and promised more yield: 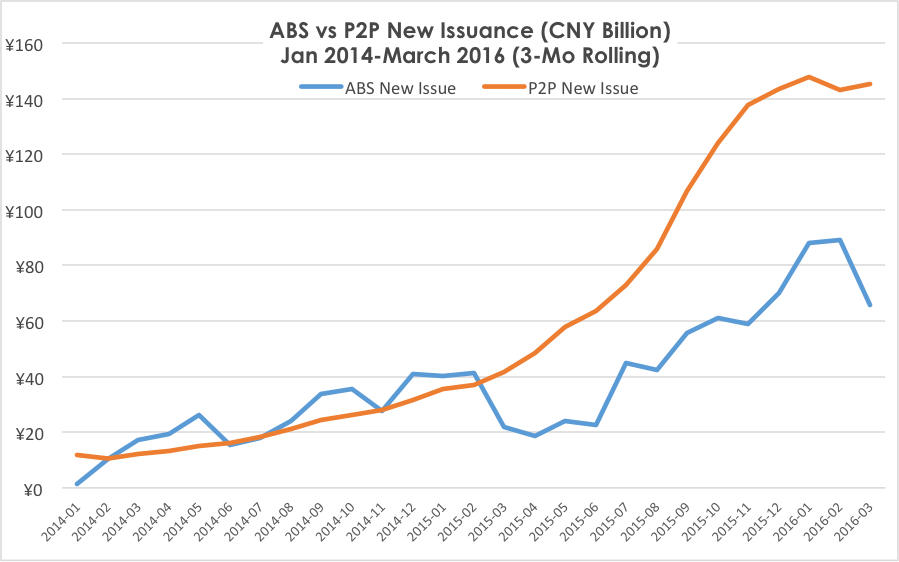 This juxtaposition of ABS with P2P may seem odd from a mature market perspective. That is, formally their networks and risk features are different. ABS is regulated; P2P is unregulated; China ABS is a funding channel for banks and SOEs; P2P is an option for non-banks to serve entities whose high default risk and administrative costs present barriers for many large commercial lenders. However, they in common that they were designed as “alternative” markets. Both utilize digitized credit analysis. Both involve shadow banking. The secondary market disclosure requirements of both are substandard.

Yet, until very recently, government had a policy interest in promoting both ABS and P2P. Until the end of last year, China’s central government, the PBOC and Shanghai’s securities regulators had promulgated or proposed tougher regulations. Anecdotally, inside certain ministries not directly involved in finance, P2P enjoyed a certain cache as a credit product that did not come from banks.

Since December 2015, the viability of P2P in China has been called into question with the fall of eZubao. More recently, the failures of large P2P lenders like Lending Club in the U.S. and Deer Financial in Shanghai have cast a shadow on the future of P2P. Everything else being equal, ABS should benefit directly from P2Ps reputational risk. It is also possible that the adverse P2P experiences and the connection of ABS to shadow markets could create momentum for bringing ABS disclosure requirements up to the standard of other markets globally.

ABS experienced dramatic growth rates in 2014 and 2015, but it was an open question whether the market would continue on its growth trajectory or stall out under the weight of the other macro-economic and credit market concerns.

That question has been laid to rest. Below, the table shows plainly that China’s ABS market growth is still accelerating. The period July – December 2015 accounts for 49% of total issuance in the market’s history, and issuance in the period January – May 2016 alone is 14% of total issuance. It is an extraordinary 25% higher than for the full first six months of 2015.

The liquidity impacts of slowing GDP, diminished yields and leverage compounded with new debt may explain some differences in this year’s ABS activity relative to other vintages: 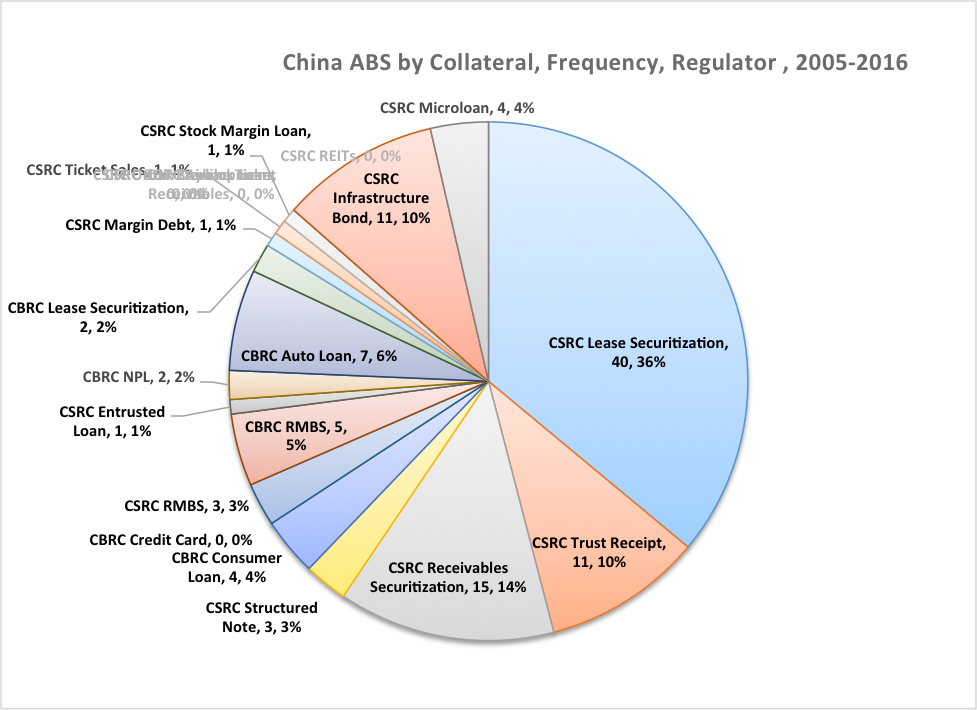 Overall, these changes suggest two trends. First, in 2016, the ABS market has been used primarily for recapitalization and funding arbitrage rather than to finance consumption, as was true in 2014 and 2015.

Second, despite the funding market disadvantages of the ABSP market identified in the Swift Paper (less legal certainty, the need for corporate guarantees on top of collateral-based credit enhancement ) its growth rate exceeds that of the CASS market, which has many policy advantages. I consider this is to be quite a positive development, given the strategic importance of the ABSP market for recapitalizing China’s state-owned sector.

To come full circle on volatility, while the data show rapid adaptation of ABS deal types to the changing environment, the ratings on some mezzanine tranches (below the senior level in the capital structure of ABS deals) seem unrealistically high. These ratings, which Chinese investors accept, appear to reflect a very different risk understanding from that in the U.S.

Moreover, Chinese investors do not have access to pool- and even loan-level data that are required public disclosures in the U.S. Sooner or later, these gaps in market practice are likely to impede further market growth. Who will take the lead in maturing China’s ABS market, and how? Will the government promulgate regulations mirroring those in the U.S.? Or, alternatively, will commercial leaders rationalize the market by making money from the inconsistencies? Stay tuned. I expect to see answers by 2017.

Read how institutions in Africa are responding to cybersecurity threats through detective and preventative measures, the implementation of Information Security...

The SWIFT Institute is pleased to announce the winner of  the Student Challenges  India - team Phoenix from Prin. L....