The rise in China’s bond yields since June this year to nearly a 9-year high is not a sign of savings shortage.  Neither is it much related to rising US bond yields, as some analysts have speculated.  Ten-year Chinese government bond yield, for example, has had a low correlation of 0.13 with the10-year US Treasury yield over the past five years.  Meanwhile, China’s corporate bond yields have mirrored domestic liquidity stress, which can be approximated by the fluctuation in China’s Bank Acceptance bill yield (Chart 1).  This suggests that the recent rise in yields has been a response to both a tight liquidity environment and the market’s demand for higher returns commensurate with higher systemic risk. 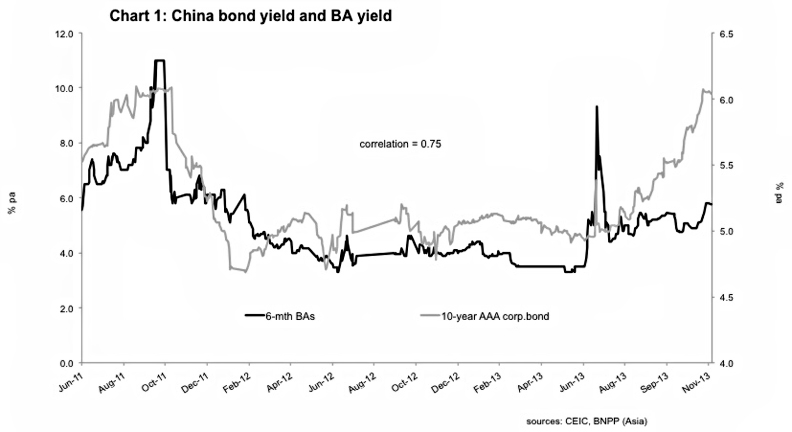 A frequently asked question is “why is bond market liquidity tight when there are hot money inflows?”  First, there has been massive bond selling by domestic financial institutions to raise cash in the face of dwindling domestic demand.  Second, hot money flows are almost irrelevant.  The best way to think about this is to use the “disjoint set” concept of probability theory.  Hot money inflows is one set, and it does not intersect with the other set, the domestic bond market.  In fact, very little hot money enters the bond market.  (Note: overall foreign participation in the onshore bond market is limited to investment quotas, which are a tiny drop in China’s RMB29.4 trillion domestic bond market capitalisation).

Fundamentally, the PBoC has shifted to a hands-off approach, letting the market decide the level of yields and intervening little.  The aim is to constrain economic growth at moderate annual rates between 7% and 8% in the medium-term to facilitate structural reforms.  This policy shift can be seen in the sharp reduction in the PBoC’s repo trades (which are an indicator of monetary expansion) in its recent open market operations (Chart 2). 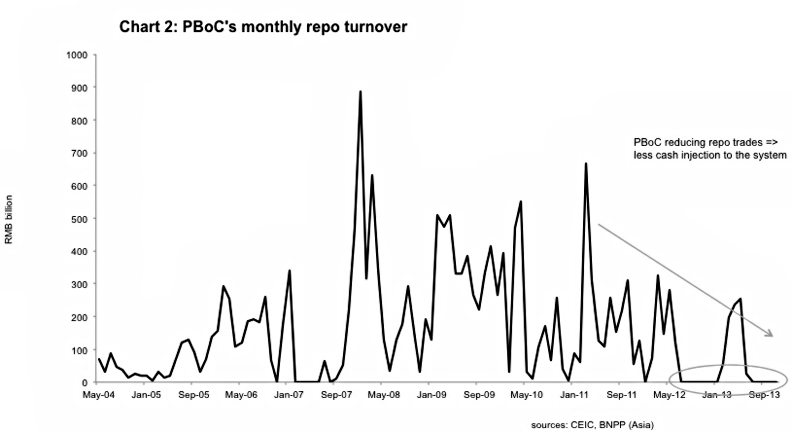 In response to tight liquidity, domestic financial institutions have sold bonds to raise cash. These bond sales are also part of their preparation for (expectation of) further regulatory tightening on banking and bank-investment operations via the shadow banking market. However, domestic bond demand has waned due to fierce competition from shadow banking products, which offer much higher returns. This can be seen in the sharp drop in inter-bank bond trading volume to only RMB1.7 trillion in November from a peak of RMB8.3 trillion in March and RMB7.1 trillion a year earlier.

Thriving shadow banking activities without proper regulation gives the PBoC a solid reason to pursue a conservative policy stance to rein in leveraging in the system. The shadow banking market has accounted for the bulk of liquidity growth, as summarised by the total social financing (TSF) flows, since 2009 (see “Chi on China: Structural Rebalancing – Part II, pp. 5-6, 16 July 2013). After a brief slowdown due to the PBoC’s crackdown in June this year, shadow banking activities have revived, boosting TSF flows while bank credit flows have remained subdued (Charts 3 and 4). 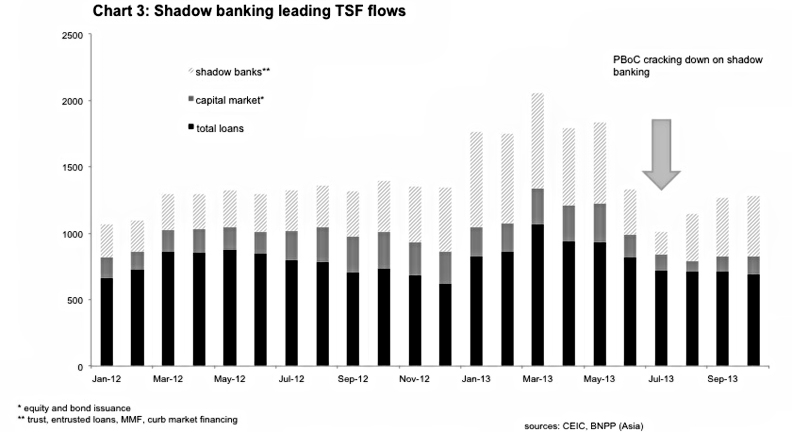 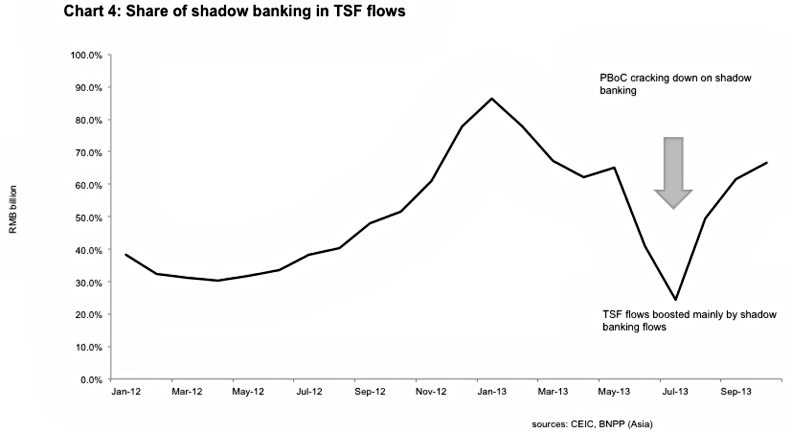 The shadow banking market is a double-edged sword. On the one hand, it helps China to eschew financial repression by providing a non-bank financing source to the private sector, which has little access to bank credit. Since shadow banks fund themselves and lend at market rates, they are liberalising China’s interest rates by stealth. The impact of their market-driven rates has spread to the bond market, pushing up Chinese bond yields.

On the other hand, China’s shadow banks are poorly regulated and the non-bank financing framework is still immature. Their activities not only frustrate the PBoC’s monetary policy (e.g. by continuing to provide credit to the system when the PBoC wants to tighten up) but also increase systemic risk due to the lack of regulations and transparency. The higher yields of the shadow banking products, which also put upward pressure on bond yields, suggest that the market is trying to price in higher systemic risk.

The market may also be trying to price in the potential risk of local government debt (LGD), which could hit bank capital ratios badly.  The National Audit Office conducted a comprehensive audit on local government finances between June and July this year.  It was supposed to release the report in October, but has yet to do so.  According to our estimate, if the LGD has risen to RMB20 trillion from RMB10.7 trillion in 2010, average Tier 1 capital in the Chinese banking sector would have dropped to 4.5% of risk-weighted assets from 10.5% now.

With administrative controls (such as loan quotas and moral suasion) becoming ineffective as a monetary management tool, the recent rise in China’s bond yields shows that the PBoC is trying to shift to a new paradigm that uses market forces to transmit monetary policy (see also “Chi on China: Structural Rebalancing – Part II, pp. 5-7, 16 July 2013). Such a policy shift is consistent with Beijing’s structural reform blueprint, which has elevated the role of the market in the Chinese economy to “decisive” from “basic”.

However, this new monetary policy paradigm also gives the PBoC new challenges.  It will have to come up with a new benchmark for anchoring its policy stance.  It has not, in my view, decided yet on what indicators to use.  It is still in trial-and-error mode in this policy rebalancing act, which will create market volatility from time to time.  The interbank offered rates may be a strong candidate as the new monetary transmission indicator due to its market-driven characteristic.

There may have been an upward shift in the term structure of China’s interest rates, as the country strives to reduce financial repression and move towards a market-oriented growth model.  The market will have to live with structurally higher interest rates in the future, but for good reasons.